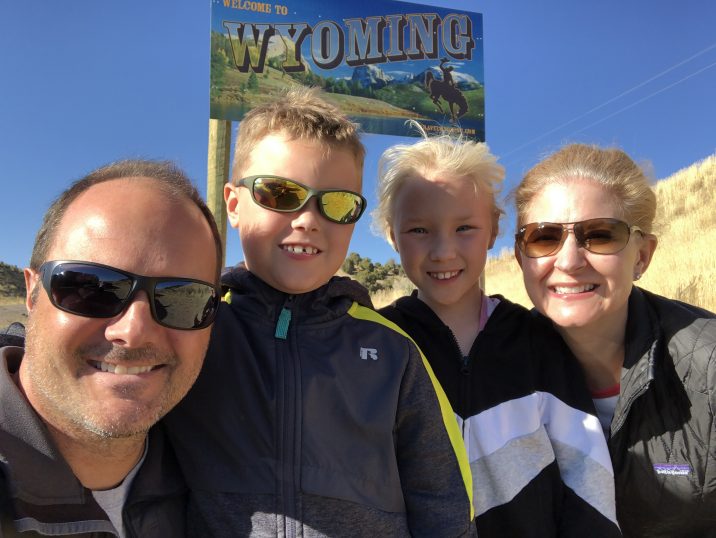 This year’s second big winter storm is moving in later this week, so we had to seriously adjust our plans. We had originally planned to leave the Dinosaur National Monument area and head to Grand Tetons National Park. After a few days there, we were going to Yellowstone…then on to Glacier National Park. The twins were very excited to see all the extreme mountainous terrain and geysers. I had several photography spots picked out.

Sadly, it looks like that entire area is going to be blizzard infested in a few days. Several of the main roads through Glacier are already closed, so this storm won’t help our visit there either.

Our travel trailer isn’t a true 4-season trailer. It has an enclosed and heated underbelly (where the water holding tanks are along with some of the water piping), but it’s not designed for true winter camping. We’ve had it out in about 20 degree weather, but that’s probably about the limit of what’s smart to do with it. It’s also no fun to tow a travel trailer in a blizzard.

So. We axed three national parks off our road trip list. We’ve been looking forward to Tetons, Yellowstone and Glacier for months, so we’re all pretty bummed about it. We spent some time explaining it to the kids – and it seems like they get it. If nothing else, it’s a lesson in risk management, decision making, or whatever else you want to call it.

We left the Dinosaur National Monument area this morning. The weather today was gorgeous. It’s hard to believe it’s going to be snowing sideways in just a few days. We drove east into Colorado, then north into Wyoming.

The drive today made me laugh about the different driving conditions in the various regions we’ve visited. In Vegas, almost everyone seemed to be lost or drunk…or both, so that’s always a special kind of fun. California (the land of horrible roads, high gas prices and no drinking straws) drivers near LA and San Diego seemed to be fairly aggressive, impatient and not very tolerant to a truck towing a big travel trailer. Utah drivers were pretty friendly and seemed to want to help everyone near them. Rural Colorado and Wyoming drivers – exceedingly tolerant of any problem.

I added up the most common moving object on the roads we saw today. I classed them pretty generally: pickups, cars, semis, tractors…then individual species of livestock. Sheep won by a landslide.

We easily saw thousands of sheep on the roads today. Thousands. Fellow drivers, this is not southern California anymore. I can only imagine the head-explosions that would happen if a mob of sheep was strolling down I-405. (It was soooo cool!)

Here’s a video of one of the stops we made to sheep-watch along the way.

The livestock made for a great break from the twins’ schoolwork and audiobooks. I’m sure this is boring stuff for the locals, but it was really great to see for us.

We made it to Wyoming – our 5th state this trip. I don’t think any of us have ever been to Wyoming, so that’s a new one for us and a new state we can mark off on our travel trailer’s US map.

Also, this picture reminds me that I need to shave.

Our Spot #13 is Red Desert Rose Campground in Rawlins, WY. This is just a one night stop for us. The campground seems nice and the employees here are great. In general, it’s pretty similar to Outlaw Trail where we stayed outside Dinosaur. The temps here are warmer than by Dinosaur, so that’s great.

On the way, we picked up a couple electric heaters and did some food resupply. Once we got set up, we took the kids to the playground. They had this cool wood fireplace. I’m imagining that the main metal fireplace insert is really old. (I have no idea.)

They played for a while before dinner. The playground had a few items that we haven’t seen in a long time. Do playgrounds even have merry-go-rounds anymore? What about those geodesic dome climbing things? Those are too dangerous for kids to play with these days, right? They have them both here! (The twins loved them both.)

After the kids hit the sack, Tanya & I figured out what’s next. This incoming winter storm is somewhat unpredictable, but we found a few places that should work to ride it out. Florida looked pretty good. Pierre, South Dakota looked like it’d be another option that would keep us in the rough part of the country where we want to be for upcoming visit spots. Pierre’s low elevation should help keep the temperatures in the somewhat-tolerable zone. Fingers crossed.

The winter storm should hit Pierre on Wednesday evening, so we’re planning our mountain escape as a 2-day trek. We have lots of planning to do still, but we’re headed northeast!