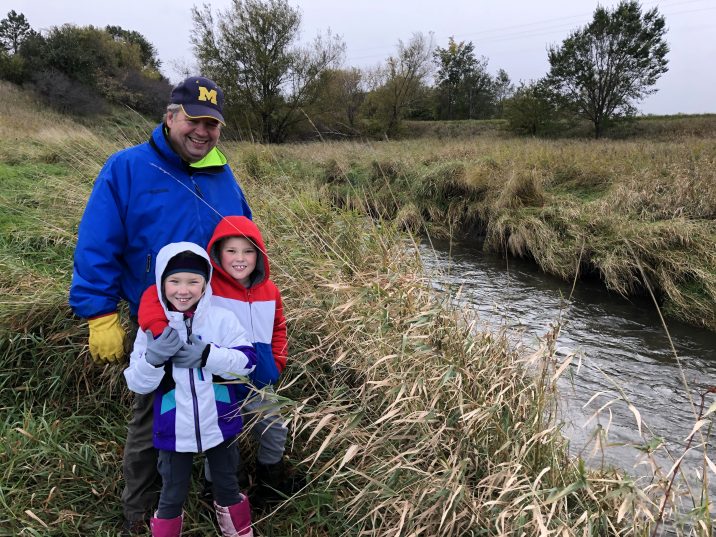 Today was another relaxing & fun day at the farm. We woke up to a snow-covered landscape. The kids were really excited when they looked out the window. They were considerably less excited when I told them they couldn’t go out in the snow while still dressed in their pajamas. (“BUT DAAAAAD?!?!?!”)

Still, they snuck in some snowball throwing before breakfast. After breakfast, the kids played in the house for a while before starting their schoolwork with Grandma & Grandpa as their teachers (thanks!).

Tanya and I drove to a semi-neighboring town, Worthington, to pick up a few things and get our propane filled. With the cold weather, we’re running our main propane heater quite a bit to make sure our trailer’s underbelly doesn’t freeze (since some of the heated air gets vented down there). One thing I didn’t think about was that all the small town stores that do propane fills are closed on the weekend. Worthington was the closest town with a store that did propane tank fills. It was about a 40 minute drive each way through blowing snow (uphill both ways, kids).

We got our propane, groceries and a few mud-friendly doormats…because, holy smokes, the gorgeous black Minnesota soil makes some incredible mud when it rains & snows.

After several trips outside, the kids didn’t want to leave the warmth of the couch. Sophia was caring for her new pet moth and a few pet ladybugs – complete with habitats she & Cameron put together. It took some serious prying, but Jay & I got them to bundle up and do some exploring around the farm. Our exploring was interrupted early by two neighbor dogs that found their way to the farm and were attacking a woodchuck. Jay saw the two dogs barking just into the woods to the southeast of the house. I walked over and the two dogs had the woodchuck bracketed. He was doing his best to fend off the dogs, but they had already beat him up pretty badly. I scared the dogs away…the woodchuck gave me a look of “hey, ummm, thanks & stuff, but I don’t trust you either…see ya!” He scurried up a tree far enough to feel safe. (Why did he not do that when the dogs attacked him?)

Back to the farm exploring. Jay, the kids and I walked out the front drive to a corn field, past the row of trees I planted with my grandfather when I was a kid, then through a few other fields, and finally down to the creek that runs through the corner of the homestead.

Like I remembered from my childhood, the grass & other plants were as tall as the kids in many places. It was great for them to see the changing vegetation as we got closer to the water. We found a deer path that led to the water and then decided to blaze our own path to the bottom of the valley.

I told the kids a story about how I went out there alone as a kid and got lost in the tall grass and had to figure out how to make it back. They, of course, thought I was dumb for getting lost. The kids both found different plants they thought were cool and took “samples” to have for later. Sophia was enamored with a type of grass that had a caterpillar-like top to it and Cameron couldn’t stay away from the corn.

We all hiked back the house shivering (well, Jay never admitted to shivering). It was a really nice hike around the farm land, but it was every bit as nice to get back in the warm farmhouse.

We had a great dinner of lemon chicken, pasta and vegetables. The snow should be mostly done, so we should be past the rough part of the winter storm. Grandma & Grandpa leave tomorrow morning, so things are starting to wrap up here at the farm. We plan to visit with my uncle and aunt tomorrow, then we’ll scoot out of town to head for warmer weather on Monday.