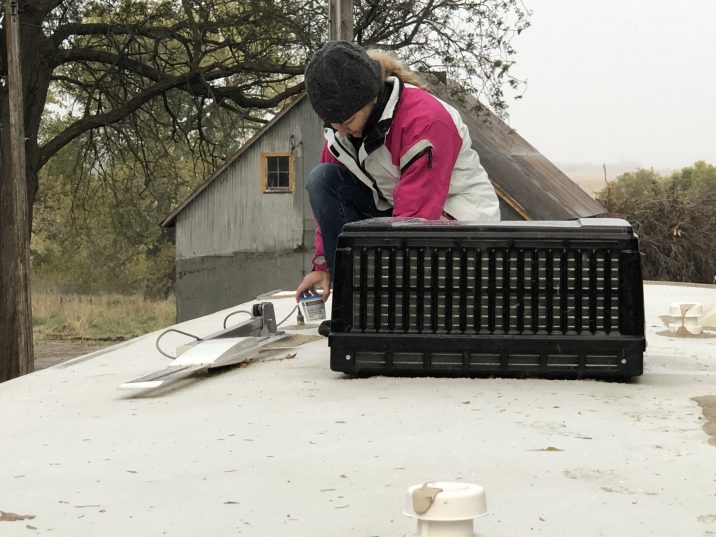 Ahhhh, today we slept in to the pitter patter of light rain. No road noise. No trains. So nice.

The twins really, really wanted to get out and play around the farm, but we, the evil parents we are, made sure school was done first. About the time they finished today’s schoolwork, the rain turned to light snow. Throughout the rest of the day, there was a mix of light rain and light snow along with a couple quick bursts of heavier snow. At times, there was enough snow to tint the ground white, but nothing stuck for more than an hour.

My mom & stepdad worked on several projects around the farm, but the twins were quick to corner them after school. Jay took them out for another round of Coke can plinking with their BB guns. Granted, they’re still in the BB gun honeymoon stage, but they absolutely love it. Grandpa Jay did some additional safety teaching and they got some more practice poking holes in cans.

The trailer is still new to this stuff they call rain, so Tanya and I found out that we needed to do some more maintenance. Our interior TV antenna handle had a drip. Because Tanya’s braver than I am on the trailer roof, she climbed up and hunted for a cause of the leak. She patched up a crack in the roof sealant around the antenna & stopped the leak. We need to install new roof vent covers too, but we’ll get to that later.

What you can’t see in the picture below are 25 mph winds, blowing snow and the coating of ice on the roof. Here’s Tanya making it happen…

Sophia had a great idea for some more BB gun learning. She suggested that we fill some Coke cans with water to see what changed when we shot them. So, we did some research. Wearing the new kid-sized safety glasses that Grandpa Jay picked up (thanks!), Sophia took aim at an empty can and then one filled with water. As you would expect, her first shot at the empty can hit it and knocked it over. There was a hole in the front and the back of the can from the BB.

The water-filled can was next. She hit it on her first try too (duh). This time, there was only a hole in the front of the can. The hole had a nice stream of water flowing out of it. The math checks.

After seeing that, she wanted to know what would happen if I shot one with my pellet gun. So, we filled up another Coke can and continued the testing. Pop! The pellet entered the front of the can just like the BB…and then completely blew out the back of the can. It ripped the can from to to bottom and water exploded everywhere. Now that’s fun! We did it again to make sure there was some statistical significance in our testing. The value of test rigor is an important school lesson, right?!

We ate a yummy dinner tonight next to the gorgeous antique buffet table that my mom refinished for the farm house. After dinner, we all relaxed in the family room for a while before heading to bed.

We have a couple more days here at the farm. Tomorrow might bring just enough snow to throw a snowball or two, so we’re looking forward to that.

We left las Vegas just over a month ago and the temps were over 80 degrees warmer then. These windy sub-freezing days…Brrr!