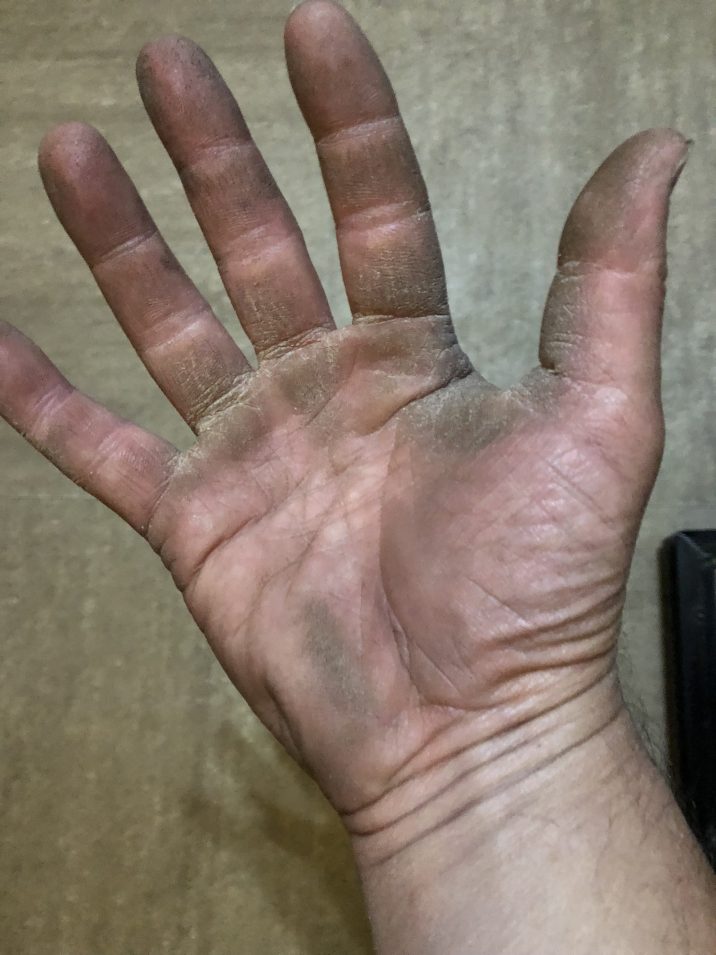 I should have worn gloves the last two days.

Today was our second full day in the Salt Lake City area. For me, it was a maintenance & upgrades day for the truck & trailer.

I started the day by picking up some more grease for the trailer axles. Paul came over to help with the work again – we decided to knock out greasing the last 2 trailer wheels first. I’m pretty sure I said something like “it’ll be a quick and easy thing to mark off the to do list.” Wrong. Once we jacked up the trailer, the rear left wheel made some sounds when we rotated it. We greased everything, but the sounds were still there. We rolled the front tire and, ummmm, it sounded bad.

It had been way too long since they’ve been greased. My plan was to grease them before the trip started, but time & priorities didn’t work out for it. Now some 2000 miles later, things were bad. Both of the rear seals were also leaking a little, so we jetted over to the big RV parts store to get new bearings, races & seals.

When we got back, Paul continued on with the trailer hub rebuilding and I started on installing rear suspension air bags on my truck.

I had a few friends who’ve used Firestone air bag kits before, so I went with their kit for the Tundra. The installation was straightforward, but I was concerned about the suspension travel with the airbags on. It looked like I’d overextend & damage the airbags if my suspension ever went to its full down travel. I’m new to air bags on trucks, so I did some looking online. It sounds like that’s just the deal with stock airbag setups – you’re probably done doing serious off roading if you have them installed.

One way to get your full suspension travel back after installing airbags is to also install air bag cradles like these. I don’t plan on doing any real offloading the rest of this trip, so I’ll add those later. I got the air bags done with some extra parts & guidance from Paul, the pro of all things air. Stay tuned for ride reports with the air bags (foreshadowing: wow).

Paul aced the bearing work and got the trailer back on its feet and ready to roll again. Good stuff.

Paul had to scoot just before Josh got home from work. After finishing up the air bags and doing some initial leak testing, Josh & I ditched the 20lb propane tanks on the trailer and set it up with new 30lb tanks. In cold weather, we can zip through 20lb tanks in roughly a day. Going with 30lb tanks should make the upcoming cold spots easier.

We extended & re-routed gas lines and modified the tank retainer mount to make everything fit. I didn’t need much more gas line, but I found a 5′ propane supply line extension that worked for a quick mod to get things going and give me plenty slack in case I wanted to hook the trailer up to an external tank. I also wanted an auto-switching pressure regulator that was easier to see when a tank was empty. So, in our re-routing, we flipped the regulator around to face forward and installed a new Cavagna 924N pressure regulator. I saw that regulator installed on some sweet new toy haulers – if it’s good enough for them…

I’m a sucker for data and phone apps, so I also decided to add some Bluetooth sensors to the propane tanks. The kit that everyone seemed to recommend (the Mopeka Tank Check kit) was on sale, so we added that too. The readings were initially spotty, but we added the recommended goo to the sensors to help the ultrasonic stuff work – and it did. I now get accurate propane tank level readings whenever I want and alerts for when the tanks get too low. Mmmm, data.

Probably the favorite thing the kids got their hands on at Josh’s was an old longboard skateboard. They rode it around a ton, but mostly by kneeling on it or laying on it. Tanya blew their minds by standing on it & riding it around. The twins were riding it around while Josh & I were working on the propane tanks. We thought this was funny – When they got done, they got some chocks to keep it from rolling off. Safety first!

After dinner and a few drinks, Josh & I also decided to wire up my new electronic trailer brake controller – a Tekonsha P3. Our old brake controller was a Tekonsha too, but it was one of the ancient bob-weight kinds that I’m pretty sure I’ve had for at least 20 years. This new one is all new whiz-bang gadgetry and should give a lot better brake control – especially on steep mountain roads. Time will tell (more foreshadowing: it seems much smoother and predictable so far).

I didn’t expect to knock out this much work in SLC. Most of it was planned, but we had some speed bumps along the way. It was awesome to have Josh & Paul’s help. I definitely couldn’t have gotten it all done without them.

Tanya & I put together quite a to do list for trailer & truck upgrades since we’re doing this whole full-time RV thing for a while. That list is almost done, so I’m hoping we’ll be able to dial back the maintenance days and dial up the fun days. Still, it was fun to get to work with Josh & Paul on all the projects.

We’re planning on leaving SLC tomorrow. On to more adventures!