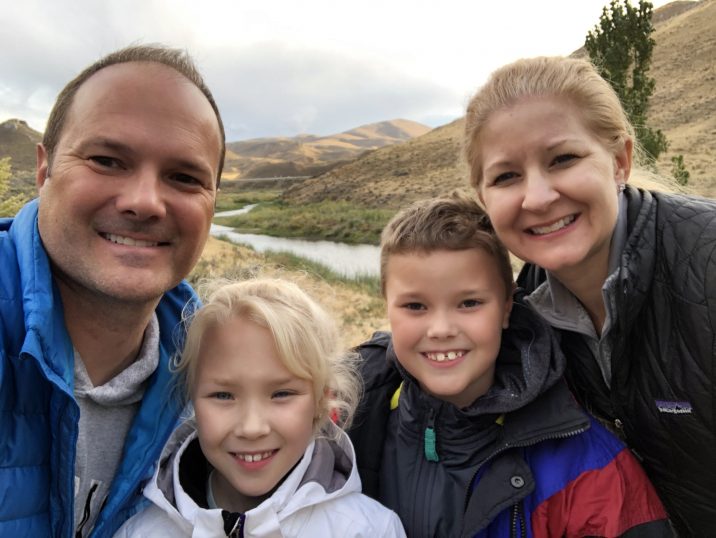 Today was a travel day. We left Reno after when we thought the threat of snow along the route was gone. The drive on I-80 eastbound from Reno was a welcome change to all the twisty & steep mountain roads of the last week (again, travel trailer, not sports car).

After about 45 minutes, there were some rain & snow showers we could see to the north of our route. Quite a few of the mountains around us had gorgeous clouds hanging on them & flowing out of the valleys.

Then, approaching our half-way fuel stop there was a wall on the highway in front of us.

My “no big deal, just a little rain” assessment was valid for about 1 minute. After that, it was snow time. The roads were mostly good, but a few areas started to get a little slippery. So, we pulled over at the next rest stop to look at some weather apps and make a quick lunch. The snow storm was about 40 miles wide and it looked like it was moving along our path. During our stop, about half an inch of snow piled up. So much for the “no accumulation expected” weather forecast.

The road areas were still accumulation-free and I couldn’t find any slippery spots at the rest stop, so we piled back in the truck and pressed on. After getting in the big snowfall again, that “why is my wiper making a clicking sound” turned into a broken wiper with the blade sliding out. Umm yeah, good thing I just replaced the wiper blades with expensive winter weather ones. We made it to our fuel stop and swapped it out with a new one. Back on the road!

Since the storm was moving fairly quickly in the direction of our travel and we made the rest stop followed by a fuel stop, we ended up driving through the worst part of the storm 3 times. Still, the roads stayed in mostly good shape and we took it slow through the snow. Again, aviation and other weather apps were an awesome help. NEXRAD radar and PIREPs were great inputs into our attack plan.

After clearing the storm, the rest of the drive was smooth sailing. We took exit 282 in Carlin, NV and then drove to near the end of the the old road through Carlin Canyon. We made it to our Spot #10 about 4:30pm. It’s a simple flat gravel area on BLM land in between the road and the river. The Campendium website was a great help in discovering this site – free with a river front spot and great views. Nice!

There was one other RV there when we pulled up, a lady and her dog in an adventure van. I said hi and made sure we weren’t going to be in her way, then we set up. I had originally planned to just leave the truck connected to the trailer, but the slope was a little too much. No biggie.

There were information signs nearby that give some history on the area. The twins ran over to check them out while Tanya & I set up.  Unfortunately, the rain & snow were a little much for the seals on a couple of the slides in the trailer and some water made it’s way past them. I need to look more to see if our desert-based trailer might have some heat damage to the seals. Thankfully, it was mostly just wet carpet. I pulled the generator out of the truck (for the first time this trip) so that we could power Tanya’s hair drier to dry out the carpet. Thankfully, the wet carpet areas were just the slide joint areas and we could easily lift the carpet up to make sure we got it dry all the way through.

We all did some exploring down by the river. Tanya spotted a couple lobster-looking things (twice as big as any crawfish I’ve ever seen). We taught the kids some things about rivers, water flow and canyon formation.

Since the generator was out, we decided to cook dinner with our electric appliances. The ice maker, George Foreman grill, microwave and toaster oven were all helping us out. We had enough stuff going that our kitchen electrical breaker would have popped, so we powered the George Foreman from the bathroom circuit. Pretty comical, but it made for a great dinner.

Once we got the kids to bed, I set up my camera gear to take some star trails and Milky Way shots. The light pollution is really low here, so the views were great. Unfortunately, just a few minutes after I started shooting the clouds rolled in and covered the sky. The only thing I got were some test frames of the Milky Way.

There wasn’t any cell coverage at this site, so after I packed up the camera gear I drove back out of the canyon by the freeway to get a new weather update. It’ll be our coldest night so far on the trip at about 21 degrees, so we put some extra blankets on the beds.

It’s time to cuddle up and get some sleep. We’re off to Spot #11 tomorrow!