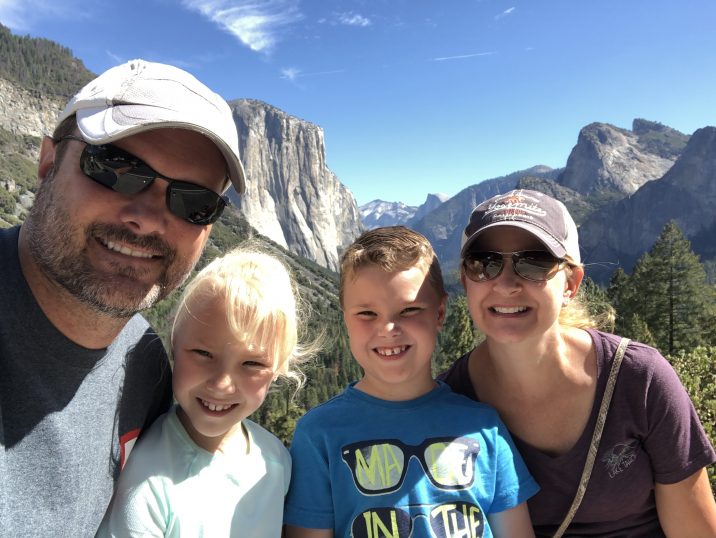 Today was our second full day at Yosemite. We slept in a little and had breakfast before leaving the campground. I’ve noticed that the kids always get full breakfasts while Tanya & I get a breakfast bar as we bolt out the door. We really should start getting them to make US breakfast.

Since the drive from our campsite to the park is on 140, we missed the touristy Yosemite Valley overlooks yesterday. Today we started our day at Tunnel View. There’s a reason it’s touristy – it’s gorgeous there. We took some family and landscape photos.

We left there and met up for our private tour of Bridalveil Fall with a really impressive Environmental Science Educator. The Bridalveil parking lot wasn’t spared from the construction they’re doing around the park – there weren’t that many people, but the parking lot was a mess. Let’s not even talk about the bathrooms (wow). From the parking lot, it’s a quick walk (can you call it a hike if it’s on a paved path?) up to Bridalveil Fall. We all learned all kinds of cool inside-scoop things about the landscape, water flow, plant life, wildlife and history from our guide. Gotta love having a pro along!

Despite the rock-mounted warnings, we scrambled our way past the end of the trail up to a couple fairly secluded spots. Everyone did more learning while I snuck further away to record some waterfall sounds & video – because everyone needs babbling brook & waterfall white noise soundtracks.

Sophia had another special guest along with her. When she was four years old, she got a white tailed deer stuffed animal here and named it Yoey (pronounced like Joey) after the place she got it…Yosemite.

We spent about an hour there before a certain kiddo’s Camelbak was magically empty followed 10 minutes later by her bladder being magically full. Strange how that happens. (Maybe Yoey drank it all?)

For those that want to set up your own educator/private tour guide, you’ll probably need to have an awesome cousin like mine who works in Yosemite. She’s doing great work getting kids outdoors, teaching leadership, the value of hard work and much more in one of the world’s most amazing places. It was so great to see Linnea again.

From there we went back to Cathedral Beach (because the kids were intoxicated by it). We didn’t see any river otters today, but several ducks were strutting their stuff. I shot some more photos of Three Brothers and El Capitan. There were only a handful of people around there today, so it was a great place to relax.

We scooted back to Yosemite Village to eat lunch. The restaurant upstairs from the deli has changed a bunch since the last time I was here. Their BBQ was pretty good and they almost-kinda-a-little-bit-sorta knew how to handle food allergies. Much to the kids’ dismay, we had to sit in the parking lot for a while in our Toyota Tundra Internet Cafe (TTIC). We mapped out our drive tomorrow and made campsite reservations for the next couple weeks. After that super-boring-MOM-CAN-WE-GO time, we left and headed back toward our campsite in El Portal.

The twins didn’t get enough of exploring the river, so we stopped by a couple riverfront campgrounds in El Portal after leaving Yosemite. Despite warning the twins of the potential pitfalls of slippery rocks and cold water, Cameron slipped and fell in up to mid-chest. He was extremely not happy about it. Learning point! Well, so we thought…he then went on to slip twice more. The last one was pretty close to a full dunking – that finally drove the learning point home. Tanya and I absolutely did not laugh our butts off at his misfortune. No way.

I later told Cameron a story about a time I went fly fishing in icy waters and slipped because I wasn’t paying attention either. Icy-cold water-filled waders were not fun. We’re hoping a tiny part of the “think about your surroundings and be careful” point was hammered home.

Today also marks three weeks since we moved into our travel trailer and started this full-time RV thing. We talked about it at dinner and we all agree that it doesn’t seem like it’s been that long. We’re even talking about taking a couple months off each year to do a new RV road trip. However, we have noticed that some of the little annoyances of RV life that we put up with on short camping trips are bigger deals when you’re in the thing non-stop. I have a few more projects coming up.

Beard status: fully annoying. I should power through to the other side (fully epic), but I’m calling it. Retirement Beard V2.0 is getting shaved tonight. Here’s evidence of it’s annoyingness.

As expected, none of us want to leave Yosemite. This place is full-on gorgeous and there are a million places where we could spend a day or more. I don’t know how anyone ever gets done with Yosemite. Still, we have some great destinations planned (some of those with potential winter-weather time limits), so we need to move on. Tomorrow we’re moving north a bit. We’re already talking about our next visit to Yosemite though.