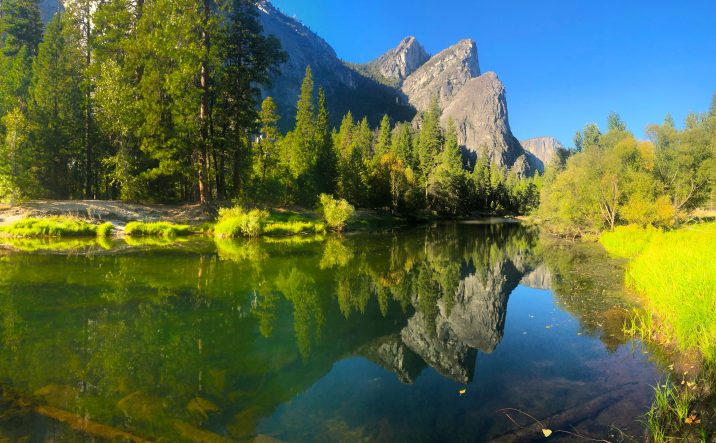 Today was our first day visiting Yosemite National Park. Like I mentioned in yesterday’s post, Yosemite is one of my favorite places on the planet. The park is massive and has a huge variety of life and scenery. Since my first visit (in about 2007), I’ve spent most of my time there near Yosemite Valley…probably like most people. The natural beauty there is incredible.

Before I get to that, I want to jot down a few more lessons learned. First is another praise for our internet hotspot. While we don’t have coverage at our campsite here, we got to the end of our first month of using our hotspot. Between Tanya & I working (house sale, our biz, my retirement stuff, etc), everyone watching Netflix & YouTube and the twins and me playing some games online, we managed to chew through about 700GB of data on our hotspot. OTR Mobile said it was unlimited and we’ve definitely put the hurtin’ on it so far. That much data without any throttling is impressive. (Yes, I know that 700GB in a month is insane data usage and that we need to get outside more.)

Second is a note on other people’s travel trailers. Airstream, to be specific. They have an all aluminum exterior and a fair number of them we see are fairly polished. We opened our windows this morning to a perfect laserbeam from our neighbor – courtesy of their trailer. It was so bright that we had to close all our windows on that side. Holy smokes, it was like one of those mirror solar farms. They’re niche-cool and all, but, ummm, no.

Aside from the Airstream laser, our site was pretty ok. The biggest frustration was the lack of sewer hookups coupled with the lack of a good dump station at the campground.

The beauty of Yosemite Valley is perhaps what attracts its biggest downfall – people. Selfishly, when I’m visiting a place as stunning as Yosemite I really want to just enjoy it in peace & quiet with only the few people I want to share it with. (Selfishly isn’t a big enough word, I realize that.) As you’d expect from a natural wonder in California, the crowds can be completely unwieldy there. At times, areas of Yosemite have Disneyland-like crowds. Because of that (and the selfishness I mentioned before), we try to go to Yosemite when we guess that crowds would be comparatively light.

I have two favorite times at Yosemite: spring and fall. Spring is peak waterfall season, so the views/photos/splashzones are top notch. Fall brings a complete change in color with contrast that’s striking. Neither times have giant crowds. We’re a little early for the fall colors this time, but I had hoped that the crowds would still be light since school has started. The benefits of homeschooling keep adding up. (Apparently now that we’re on a long-term road trip, this is called roadschooling.)

Today’s crowds weren’t Disney-class, but they were more than I expected. They’ve redone some of the roads around Yosemite Village and there were several parking areas closed. It took a while to find a parking spot near the Village. We stopped there first to do some admin-type things. There’s cell coverage there and we’ve been fairly off the grid since leaving Anaheim, so, yeah, our first stop in Yosemite Valley was to check email and upload blog posts. We also knocked out some banking stuff we needed to do and did some big-picture planning for our routes over the next week. We bought some new Yosemite shirts like the good tourists we are.

We ate a quick lunch at the burger place in the Village. The wildlife outside blew the kids’ minds. Squirrels, chipmunks and birds. Did I mention that we’re extremely glad to be leaving the desert? On our drive in, we noticed that Bridalveil Fall was flowing, but Yosemite Falls was not. It sounds like we missed Yosemite Falls by just a few weeks. We ditched our Yosemite Falls plans and flexed to other great things to see.

We decided to do some driving around Yosemite Valley to remind the twins of all the sites. After a lap, we stopped at my favorite river beach in Yosemite: Cathedral Beach. Shhhh…this is a secret. Don’t tell anyone. My favorite beach spot to sit back and relax is a bend in the river just upstream from Cathedral Beach. A quick 5-10 minute hike lands you at a secluded spot with what I think is the best view of the Three Brothers.

It’s a fantastic spot. No one is ever there. The river is calm with fantastic reflections of Three Brothers (at least this time of year). On top of that, we were treated to some fun wildlife action of three river otters and a great variety of birds. None of us wanted to leave. Tanya even did some spy work to get some really cool views of the river otters playing on the beach and catching fish. Awesome stuff.

I also did some photography work for a new branch of our business we’re setting up. We’re going to start selling some photography prints. This road trip is designed to let me get photos of some amazing landscapes. Most of the photos I share here are from our phones. My photos with a “real” camera will go up on another site…coming soon!

Nerd alert! The twins and I decided that it’d be awesome to spend some time doing some multiplayer video gaming while we were in the park. So, sitting next to the Merced River near Cathedral Beach, we fired up our internet hotspot so we could all link together through its router and plopped down on a fallen tree a stone’s throw from the river. We played a Minecraft world that Sophia started – complete with a hotel reception desk and room keys. As far as I know, we’re the only people in the world to ever sit down under El Capitan and Three Brothers to play a three-player multiplayer video game. If there’s a prize for that, we win it.

We headed back to our trailer after Cathedral Beach. Starting a couple days ago, Cameron’s been fighting an ear ache and possible ear infection. My guess is some pool/hot tub water from Anaheim snuck past his ear tube and didn’t cooperate with his ear. Tanya did some great work earlier today getting a prescription called in for some ear drops for Cameron. Once we got back to the trailer, Tanya did all the hard work of getting the kids fed, showered and put to bed while I snuck out to the nearest pharmacy that had Cameron’s medicine in stock.

So, that was our first full day at Yosemite. Even time I visit Yosemite I wish for a longer trip. This one will be no different. There is more to see and do here than you could accomplish in a lifetime. We have some fun things planned for tomorrow, but we’ll all want more.