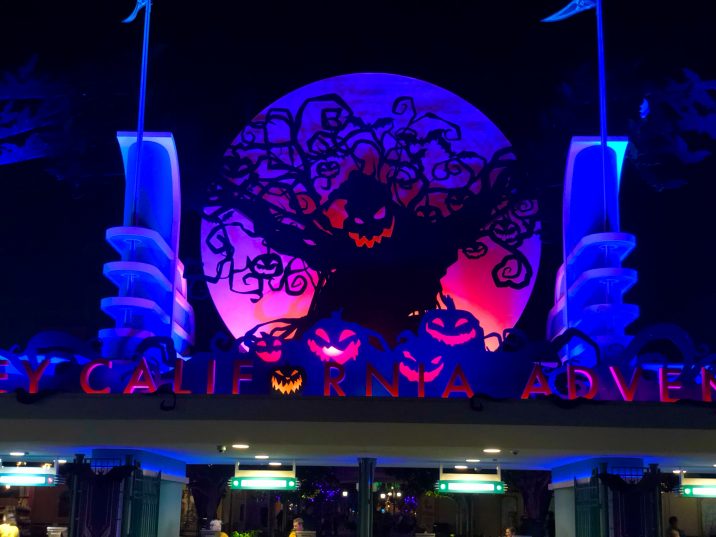 Today was our first of three days at Disneyland & California Adventure with our friends Michael and Amber and their kids Oliver and Elliot. We took the ART bus from the Anaheim RV Park and that worked out like a champ. The weather was perfect too. Tanya used some crowd predictor websites and picked this week for Disney because it was expected to have really light crowds. She picked well – the park was almost empty for most of the day.

We started out in California Adventure because it closed early tonight for a Halloween party. We started in Cars Land and then made our way through most of the park. The twins were both tall enough to now ride Incredicoaster and they leapt at the chance. I’m happy to announce that Cameron and Sophia both have now been upside down on a roller coaster. They even want to ride it again. Win!

Of all the things I wasn’t expecting today, this was just about at the top of the list. We rounded a corner and saw one of my true loves sitting there, lifeless. Oh, how it hurts to see airplanes I’ve flown used as amusement park props. They were still doing construction on the new Avengers area, but they had this Eagle sticking out of a fake hangar. (Don’t worry, there were no human true loves actually lifeless there today.) I did a quick scan of my flight logbook on my phone, but it didn’t look like I’d flown this tail number (or at least the tail number they painted on it). Captain Marvel cool or not, it’s still strange. Seriously strange. Heartbreaking even. (It didn’t look like they had the onboard step ladder secured…for a split second I thought about putting the ladder out to get a better photo of me & the twins standing on top of the inlet.)

We hit a few other rides that the kids could now do by themselves thanks to a little growing and a little aging. They pretty much thought that was the coolest thing ever.

We also managed to find a craft area where the kids made some masks.

Sophia and I lucked out and got to be pilots for the ride. Because of some strange thing that probably only spaceship designers in a galaxy far, far away understand, the pilot on the left (me) controlled just left & right while the pilot on the right (Sophia) controlled up and down. Still, we’re space ship pilots! (To my friends who are real space ship pilots, you know you want some of this action too.)

I was in full nerd-out mode. The detail they put into everything in Galaxy’s Edge made me want to join Disney’s Imagineering team. (That’s not the plan though…I have plenty of my own engineering to do. Still, it looks like they get to play with some really cool toys.)

We ended the day after dark. It was an awesome first day. We’ll be back for more tomorrow!