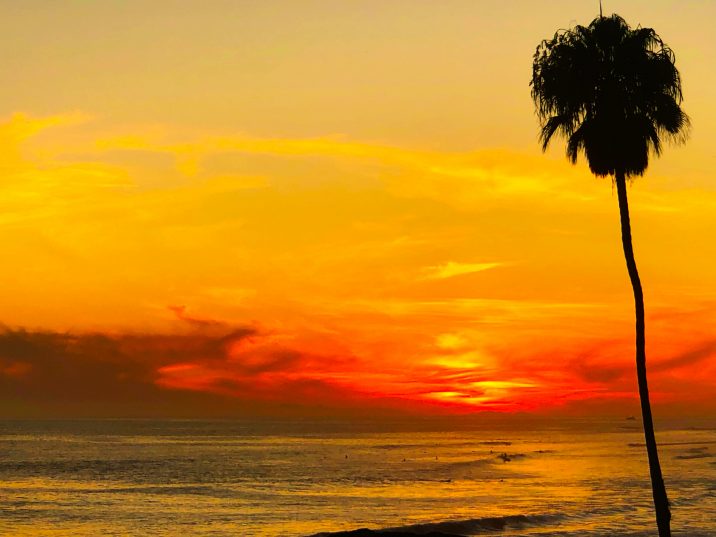 We’re trying to set our trailer up for long term living – could be a month, could be 6. So, we have a pile of upgrade projects were doing intermixed with the fun part of the road trip.

I started today off with a trip to a couple stores to pick up bits & pieces for 3 different projects. While I was out, Tanya & the twins hit the beach. It looks great, but the kids weren’t huge fans of the rocks. It was really tough for them to play on the beach or in the water because of the rocks. Still, the sand, sun & water did some serious loving on the family.

Tanya’s cousin Lisa drove up to meet us for the day. I managed to sneak her past the Marine gate guards (which took two different guards checking my military ID) and we got back to the travel trailer just as Tanya & the kids made it back from the beach. Lisa showered us with farmer’s market gifts, including some amazing tamales that she and I had for lunch. Holy smokes, they were good. Mmmmmm.

After lunch, I got cracking on the kitchen faucet. Standard stuff: I pulled everything out of the cabinet, removed the old faucet, and sopped up the mess I made when I disconnected the water lines.

As luck would have it, the holes in the countertop weren’t big enough for the new faucet, so I used my shiny new Dremel tool to reshape the holes to work. (Don’t tell Tanya, but I was secretly way happy to buy a new Dremel tool. I bought my last one in 1996 right after I bought my first airplane. I didn’t bring the old one, sooooo whataya gonna do!?)

The Pex tubing connections for the old faucet weren’t the same as the new (non-trailer type) faucet needed, so I slapped some adapters on and finished the install. I think it turned out A-OK.

After we had water back on, I shifted gears and hung the new TV in our bedroom. I did some research last night and discovered that it was pretty common for Dutchmen Kodiak to leave off the TV mounting support wood in the bedroom. Thanks. So, I bought a 16″ wide shelf plank of wood and had Lowe’s cut it to the length I wanted (semi-interestingly, 16″). I mounted it with big metal screws into the metal structure at the top of the wall and used some hollow wall anchors to help secure the bottom of the board.

To check out the strength of it, I did my best to do some pull ups on it. After that test of my not-strength, I attached the TV mount to that board and tidied up all the connections. I sanded all the edges of the board, but didn’t stain or paint it. We’ll get to that later (whenever we’re really really bored). The board sort of looks like a wooden cutting board mounted on the wall — just in case we need to slice some sushi in the bedroom, I guess.

Tanya spent a lot of time organizing the trailer and the truck. So far, the joke of the trip is “put it in the truck.” We bought a new Leer 100XL cap for the bed of the truck to make storage of things easier back there. We’re trying to be really mindful of weight so that we don’t push it past the truck or trailer limits…but there were still several things that got banished to the truck’s bed. We’re already talking about getting rid of some stuff by shipping it to some friends for us to pick up later. Anyway, it’s really interesting what you discover that you want vs what you discover what you don’t want.

We had a great family dinner with Lisa of Caprese Chicken with pasta followed with an angel food cake & strawberry dessert. It was awesome enough that we passed on the follow-on campfire s’mores we had planned.

For Christmas last year, my brother Jonathan made a gorgeous cutting board for us. It’s so nice, that we couldn’t bring ourselves to use it. It sat on display in our home until a week ago. We caved. When we were packing up for our full-time RV road trip, we decided it was too perfect not to bring along and use. So, tonight we used it. Ohhhhh, and the bread we cut was that much better for it. (The cutting board is still gorgeous, of course.)

The twins are working on their photography chops this trip and Cameron did a great job with sunset photos from the beach. Here’s his favorite from tonight.

The twins really loved hanging out with Lisa. She spend some quality time with then down at the beach watching the sunset. Cameron took some selfies with her while Sophia did some rabbit ear photo bombing. (We’ll work on his exposure, composition & eye angle later.)

I took a few shots from the bluff. I’ll process my DSLR photos later, but here’s an iPhone shot.

We have another full day here tomorrow. There are several more travel trailer projects left, but we’re looking forward to tomorrow as a relaxing final full day on the beach.